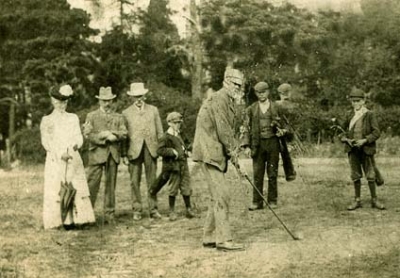 Every now and again something comes along that gives you an historical insight of some significance.  Recently the discovery of a photograph from the early part of the last century gave us a new understanding of the importance of a local town during the late 19th and early 20th century.

Dated around 1907/8 the photograph portrays the then Prince of Wales (later King George V) and his wife Queen Mary of Ketch in Llandrindod Wells enjoying a game of golf.  One of the Prince’s playing partners, who is teeing off, is none other than the famous and popular playwright George Bernard Shaw, so it was quite a prestigious group.  You can only imagine being one of the young caddies in the photo who are accompanying the royal party, it must have been quite an experience.

To have such an illustrious party playing in Llandrindod Wells shows the huge significance of the spa town during the late Victorian period when the curative powers of the waters were considered to be of great significance by the gentry of the period.  Whilst no longer attracting the many tens of thousands of visitors “to take the waters” that it did some 100 years ago it nevertheless still has a magnificent golf course that was designed by none other than golfing legend Harry Vardon, that can still be enjoyed today, over 100 years after the photograph was taken.

So if you would like to follow in the footsteps of the Prince of Wales, then why not book a Heart of Wales Golf Break and enjoy a royally inspired golf break.

To book your golf break contact Catherine on 01597 828598 or This email address is being protected from spambots. You need JavaScript enabled to view it..